So my youngest brother is getting married! How time flies. He was the tinniest when he was growing up and I couldn't even imagine that he would someday settle down and start a family with a girl because my family and I thought all he would have as a wife would probably be a mustang! Yes, CARS!

He first drove (pun intended) us crazy by driving our dad's pick up truck away for about 30 minutes to a nearby village when he was 10 years old. Yes, 10 years old! How would you feel having a 10 year-old leading the wheels?? My dad panicked when at that time he noticed that his truck was gone missing! Who would have thought the little boy who was actually seen cycling not too long ago, ran away with a truck that heaven knows if his feet would even reach the brake pads?? But my brother did. He drove to a next door village, about 2 kilometers from our village, and those who recognized our dad's truck actually thought a ghost was driving it since no head popped out at the driver's seat! They had to ask dad about the spooky incident and it was all because of the little mischievous lad...

Today, my brother actually line messaged me if I could help out with his wedding plans. I see this coming ever since he got engaged but little did I bother of how I would feel when he would seek my advice about wedding preparation. It all sounded "too soon!" But here I am, enjoying looking at Reeds rings, wedding gowns and door favors online. I need to learn to leave those notions I have about how little he knows about the world but ponder upon how much he actually have learned about the world that he is willing to take the plunge to drive to the gates of marriage!
Posted by Hobbit Wife at 9:33 AM No comments:

So we came home from our weekend shopping yesterday and little Hobb was not in a good very mood. Hobbit parked the car and unload our things. I had to do the most dreaded thing (something we recently discovered), that was to take the boy out of his seat in his sleeping state. Now, how nice can a sleepy boy get when he knew he would be taken out of his comfy seat and out of his ultimate 'rocking' car?? Not so nice. So I unlocked the belt and tried to carry him out of his car seat. Guess what? He screamed non-stop that Hobbit and I needed to find the right thing to say to calm him down.

When Hobbit, little Hobb and I reached home, little Hobb didn't want to take his shoes off and didn't want his feet to touch the ground just because he didn't have enough of his car ride yet. He kept pointing to the direction of the car and we were loaded with shopping bags. We had no choice but to put him down hoping that he would calm down when we shove him his 'neh!' Guess what? We shoved him almost everything and nothing worked. He was yelling and screaming while standing alone in the middle of the living room, not wanting anyone to touch nor hold him.

So we left little Hobb to cool down by himself and hopefully will play with this toys and vic firth drumstick with free esb bag, but nothing happened. He just cried away until it attracted our neighbors.

Now my point is, I know clear well that I have sweet boy and people do tend to look at him as a pleasant toddler to be with. Yet, he is no different from other kids in terms of throwing tantrums and rolling on the floor hoping mama and papa would read his mind! I really don't want people to think that I have a perfect kid but I want them to clearly know that he is a toddler and not being nice once in a while is totally a growing up process that all of us had to go through. Right?? :)

Politics and Disasters of Late

Hobbit and I came home and talked about the situations in Thailand and in the Philippines this evening. We didn't get too overwhelmed by the result that Cambodia, not Thailand, has sovereignty over a disputed promontory around a 1000-year-old temple, but we got too emotional over the sufferings in the Philippines. Reading all the news about the Haiyan typhoon just broke our hearts especially when children were involved. We could totally imagine children crying for their parents or parents crying for their children. The following is an example that demonstrates how even in the midst of a huge disaster as the Haiyan typhoon, God is present in the lives and sufferings of those involved. Read the story here. 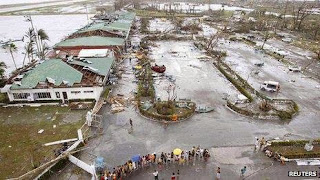