My Walk To Madam Butterfly

This week was one of those weeks where I thought I should be relaxing more than working and sleeping more than waking but everything went the other way round.

After my school's retreat, I went home to do laundry, tidy the kitchen, wash the dishes, unpack stuff from the retreat, continued routines with little Hobb and did many more rounds of laundry after that. Both Hobbit and I were super exhausted. Nanny was on holiday.

The next day, instead of church, we decided to praise God from home. Taught little Hobb songs and praises. We went to fix the broken breast pump (after it was returned to me) as instructed by the sales lady, but apparently it was already fixed. Silly her for not checking and all that miscommunication on her part. Sabbath went by swiftly...

It was 5pm and the weather was getting gloomy. I rushed between dolling up myself and preparing little Hobb's food. If my mind was blessed with hands and feet, it would be able to by-pass my multitasking skills. Obviously it worked quicker than my physical capabilities. I was lost in between my mascara and my hungry baby's yell! To top that, Hobbit was worried of me being late for my 6pm appointment with the van in school to go watch the Madam Butterfly with my students at Thailand Cultural Center. Whew!! He pushed me to the max so I could set my head right and focus on where I would be going. That he would make a careful attempt to handle little Hobb, alone.

Van to leave at 6pm and I was just halfway to the van, I decided to be "frugal" and took the BTS and then the MRT. Just as I was running up the BTS, my heels felt as if they were about to break. Ahh! Why do they have to break today?? Throughout the hallway to the MRT train, I was hoping everything would be a short walk away. When I reached Thailand Cultural Center, I thought as soon as I stepped down and go up the escalator, I would see the migthy TCC. Nope! My opposite view was of Big C. Then as I walked further,I decided to stop and ask for direction. Ahh, it's bla bla bla bla bla. That's also a description of how far I had to walk. And sweat.

As soon as I arrived TCC, I went into a convenient store, bought a cold drink, drank all of it, ran to the restroom and wipe all the yucky sweat away. This was how I attended Madam Butterfly. Moody and smelly! Yet thank God that it was all worth it. The play was really good. I got to come home with the van halfway till school. And it rained, but I managed to take a taxi home.

Hobbit was relieved that I came home safely yet he was more thankful that I was home to relief him from handling baby hobb all alone. :)
Posted by Hobbit Wife at 2:26 PM No comments:

I haven't find time to share my 30 Day Challenge Photography with Baby Hobb yet! Argh!! I have taken the pictures everyday. Just need to find time to blog! Work have kept me busy and with the triple A visitation to our school this week, life hasn't slowed down a bit. On top of that, it is to my health expense that I am running all these errands until weekend says hello.

Right now, all I think about is that cozy bed at home. It's calling me like crazy! My working environment is really contaminated right now. Not a good place be with all the different kinds of viruses circling in the air. Yet I am grateful to still have the energy to work. This flu is not a good thing. It basically hinders me from doing full swing of what I do best in class -- talk. My students are happy because I 'babble' less and let them sit and do their work peacefully. I need to know where to find pandora charms that enables me to get better and on my feet again. I have a whole lot of monkeys to watch over my shoulders, and a baby to care for. God help me!
Posted by Hobbit Wife at 9:26 AM No comments:

I would love to tell you about everything rosy since Nanny number 4 came to town but of all the things that has worked out for me, this I would like to defer, at least on the rosy part. Nanny number 4 had to leave and now we are settled with Nanny number 5. Nanny number 5 is actually Nanny number 4's aunty. The transition was easy thus I had nothing to complain about.

Nanny number 5 loves music. Every now and then, without holding back she would sing to Little Hobb familiar hymns and worship songs. It made my heart smile everytime I hear her singing songs that I want Little Hobb to get familar with. Not some luk thungs and some Karen pops that I have no clues of. I hear this a lot from Nanny number 3. Oh, she called me, this Nanny number 3. Telling how she should have thought it twice before resigning and wanted to get her sabai job back. Yeah, they call baby sitting Little Hobb a sabai job. Well, why did Nanny number 3 even have the nerve to call back and ask me to look for a job for her after all that worries she put me through? Dang, this post is for me to talk about Nanny number 5! Being young, I applaud her for being able to have that motherly instinct for Little Hobb. Makes me think if I should take her to our company picnic at the end of this school year...

Well, it has been a week since Nanny number 5 came, I think she is doing a good job with my baby. She does not cook like our Nanny number 2, yet she is helpful in every ways. Having her indeed is another way God showed us that He care.

I have been keeping this list like forever! You know how you say "Someday if I have kids, I will do this with them..." Although still too early, I think my 'someday' has arrived. Don't worry! Little Hobb and I will share our 30-day challenge and fun with you, here! 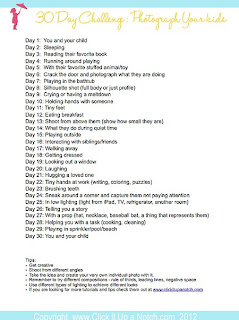