How Many Kids Should You Have?

My current thoughts is why I write this post. My doctor and parents started this discussion with me and therefore need my immediate decision...

Before we settled down, Hobbit and I thought and discussed about having kids. We said we will have, to the most, TWO kids. As years passed by, we got married and slowly witnessed our married friends had their own kids. The process and the 101 things that our married friends had to go through with their kids, we captured them all and even tried to put ourselves in these new parents' shoes. We thought, too overwhelming...and we slowly brought our number of future babies down to ONE and to some point...NONE.

Then the time came. We were ready...However, it took us quite awhile before the ONE miracle happened. :) Now that the ONE is here, should we think of the TWO, so we stick to the original plan?? Well, question like this is not an easy one for any parents I am sure. I am driven to think of how our grandmothers and grandfathers survived with a dozen kids yet to have two nowadays is already a question. Is it money or time? Or is it selfishness or freedom? What is it that hinders most people to have more than one child nowadays? I really want to know. Let me play my yoyo toys while I slowly work on my fingers...
Posted by Hobbit Wife at 3:23 PM No comments:

Of late, I have been receiving news about death. Just a day before yesterday, one of my dad's friend, whom I never met personally but got to know through FB, passed away and it makes me ponder more about this life we are given. They say death comes like a thief and that nobody knows when this thief is going to rob a person from his/her loved ones. How true. Whenever I hear such news, I tend to ask myself, how can I deal with this? Or how can I accept this? Or how can people who just lost their loved ones deal with this? And more of the what ifs questions pop up...Whatever the answers are to my questions, I am just so glad that I can always depend on the hope that the Bible has assured me. The hope that one day, there will be no more parting, no more teary goodbyes and no more death for He will wipe every tears from our eyes (Revelation 21:4).
Posted by Hobbit Wife at 2:17 PM No comments:

Hobb baby has a cousin who was born a few months earlier than him. They almost look similar in looks except that cousin A has thicker eyebrows. Too bad genes from Hobb mommy didn't give him the magical eyes nor eyebrows and eye lashes! Anyway, Hobb baby has been exchanging gifts with cousin A for a month now and what is interesting with their gift exchange is that they give similar things but with different designs and colors. Hobb baby would give cousin A something that cousin A's mom couldn't get in Malaysia and cousin A would give Hobb baby something that we couldn't possibly get here. Nice gift exchange right? So now, Hobb baby's mom has ran out of ideas of what to send to cousin A in favor of Hobb baby. Maybe it's good to surf gift baskets at GiftBaskets.com. Hobb baby also need to prepare a gift to a special friend who is going back to his hometown in Cambodia soon. I better get busy!

On the other note, thank you Bangkok for the scorching heat you provide us. That's what you call shelter, eh??

Today is Hobb baby's full moon birthday aka one month old. Time flies really fast it seemed just yesterday I checked into the hospital to deliver a baby! Hobbit and I have so much to be thankful for. God has been faithful to us and we believe He will continue to be. 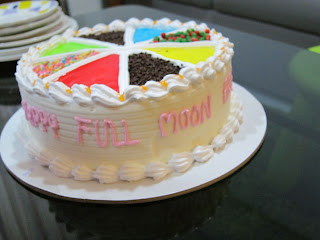 Last Friday, Hobb baby's maternal grandparents came to town. They brought many surprises and among them was a baby swing for Hobb baby! He kinda like it but felt 'different' when he first slept in it. I have to move my cpu cart out of the way to accommodate the frame of the swing. Ahh, grandparents...they really 'spoil' their grandchild!

So today, my parents invited the Sabahans here to celebrate Hobb baby's full moon. Dad was the one who did the cooking, mom took care of Hobb baby, Hobbit took care of drinks and I did the shopping! I am so glad that my parents are here to help although we have to throw dice to see who will stay home to look after baby when the rest of us go out.

Happy Full Moon Hobb Baby!! We love you!!
Posted by Hobbit Wife at 8:39 AM No comments:

While I was still suffering from an overly baby 'coma', baby Hobb decided to wake us up again and I had no choice but to wake up this morning to his groans. Hobbit obviously bothered less since he had his shift till 3am this morning. I wanted to pull all my hair out while getting up but thinking that we invited this responsibility, I got up and picked baby Hobb up examining his continuous needs. He has been snorting since last week and I hated how the doctor told me that it is normal in newborns. Whenever baby Hobb snorts in his sleep, he would get very irritated and I felt like kicking myself! Blardy snort robbing my baby's goodnight sleep! Oh and his papa and mama's sleep as well!! At once I decided to do the steam and salign drops. It is baby Hobbs no. 1 enemy but hey baby, it's for your own good! Hobbit helped me with the steam, I did the salign drops while baby Hobb woke the whole neighborhood up. Next, I prepared his bath so he would feel fresh and hopefully less cranky. Who knows, he peed right on me while I was shampooing him! Now I had to take my shower to make me less grumpy and eliminate ACH risk! Papa went to work, leaving baby Hobb and I struggling with our own give and takes in this hot hot weather! He is obviously too much a cry baby, as of today. Urgh!
Posted by Hobbit Wife at 2:37 PM No comments:

Email ThisBlogThis!Share to TwitterShare to FacebookShare to Pinterest
Labels: Baby and Pregnancy, Family

Two days before baby's 'big day', Hobbit decided to pull out his dusty acoustic guitar and strum a tune or two for his little boy before he comes out saying that it would calm baby down (baby was wiggling all the time) before he comes out. Ummhh, I was unconvinced by the theory and decided that he should just play to practice and gain back his skills. A bit disappointed, he retreated to a corner and strum away a few songs before he came to me and said "lets do a survey on guitar amps...I think I will practice more that way.." Well, I was already thinking of what to give him for his birthday. Now that he suggested something, I might as well do a thorough survey and ask around if anyone knows a place where I can get good guitar amps at a reasonable price. Anyone??
Posted by Hobbit Wife at 4:20 PM No comments:

This happened on 16th of March 2012. I was browsing facebook and all of a sudden I see condolences to a family name that I am very familiar with. So I quickly asked friends back home about the cause of fatality. So one of them directed me to the news below. No one know exactly what and how the fire took place but overall I feel sorry for the family. May they find comfort in God. 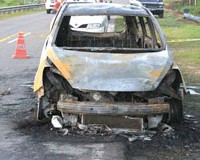 Kota Marudu - Police have launched an investigation after the charred remains of a senior government officer was found inside his badly burned vehicle.
And, they have identified the deceased as Hilde Bin Primus @ Hilde P. Kayau, the assistant district officer (ADO) of Kota Marudu.
District police chief DSP Mohd Isa Yusuff (pictured) told New Sabah Times they rushed to KM 12, Jalan Tandek-Kota Marudu upon being alerted by the public at about 4.45am yesterday and found the charred remains of Hilde inside his burned Proton Exora, a sport utility vehicle (SUV).
He said they did not suspect any foul play and have classified the incident as sudden death.
"We are also awaiting reports from the Forensic and Chemistry Department," he said.
Mohd Isa said initial investigation showed that Hilde was driving home to Pitas when the car caught fire.
"We were also informed that the deceased's vehicle has had wiring problem twice prior to the incident," he said.
To a question, Mohd Isa said Hilde's wife who was at the scene had confirmed the charred remains was those of her husband and the vehicle belonged to him.
Meanwhile, Kota Marudu MP and Minister of Science, Technology and Innovation Datuk Dr Maximus Ongkili when contacted in Kuala Lumpur yesterday said he was saddened by the incident.
He urged the police to conduct a thorough probe.
Dr Maximus also said the late Hilde was a good officer and well accepted by the local residents.
"Hilde's death is a loss to the civil service," he said.
--Courtesy of New Sabah Times
Posted by Hobbit Wife at 4:01 PM 1 comment: