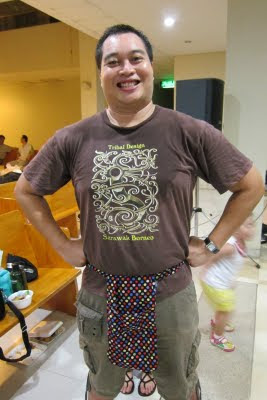 John with his pocketed cawat
For a headstart, cawat is an Indonesian word, meaning breechcloth, gee string or loincloth. In Sarawak, I have no idea how but I know one of their traditional costume includes a gee string-like cloth called cawat. 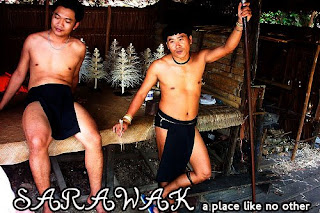 Took this from a website. A simple one indeed.

I had volunteered for an assignment for the Bkk-M'sian annual Gawai/Kaamatan celebration. The initial plan in mind was to make a funny doeramon/hello kitty-printed cawat but my shopping spree told me that could only happen if I'm willing to cut out bedsheets and pillow cases! So I went with a disco light theme. 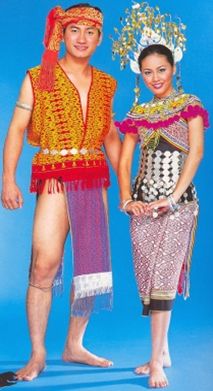 This picture is from here. The costume.

Sarawak is very close to where I come from but still, I haven't set my feet on its soil yet. So to imagine how a cawat would look like is not quite easy. What I did and I believe everyone would do was to look up on google image. After clicking through several pictures, I kinda have an idea of how and what my version of cawat should look like. I would make it simple, easy to wear around the waist and not consume a lot of materials. The men who would wear them will not be in full costume anyway. Perhaps mine would be a casual cawat, if that term is allowed. :) 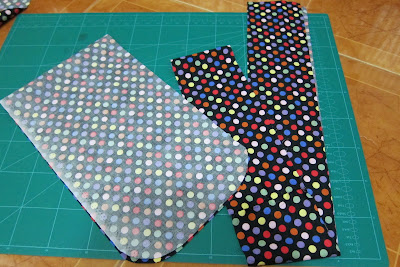 First, I asked the guys for their waistline measurements, then went ahead and cut and piece together according to their sizes and left some space for knot tying. Next, I cut 8" by 4.5" of doubled-cloth, cut curved edges and sew them up. I left a 1.5" at the top part of the cawat's covering for the string to run through. By the way, Hobbit helped with all the foldings and ran the strings into the coverings of the cawats. It took us 2 hours to finish 6 of them all. My simple cawats came out fine, not perfect but wearable. 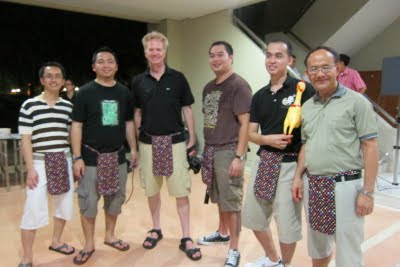 I was hoping they discard their shorts while wearing their cawats..lol

By the time the men got their cawats, they 'sempat' wore it in style before our Gawai performance. Some wore it as a bib on their neck, some just tied a bow while flinging the coverings to the back of their neck, some even wore them as fancy neckties. Clever cheap lipofuze!! With all those fashion shows, I was inspired to make something else from what I see! 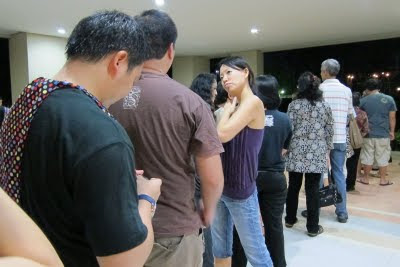 Email ThisBlogThis!Share to TwitterShare to FacebookShare to Pinterest
Labels: How Tos, Leisure and Hobbies