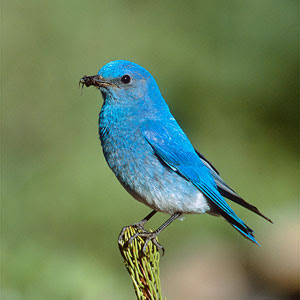 I remember an uncle who had a remove tattoo. I was curious as to why his right arm had a very funny shape that almost looked like a bird but it has some extra design besides it. After 5 years of curiosity, one day I had a chance to sit with him and had a nice chat. I asked him what the tattoo on his right arm was and he simply mentioned "bluebird". Bluebird? So I asked what were the extra design? They were letters. The letters made up one significant word that meant so much to him when the day he got the tattoo done. As we sat there and he revealed about the story behind his tattoo, I remembered that the only thing I felt that time was crying.
Today, I stumbled on Charles Bukowski's touching poem called Bluebird and it reminded me of the above incident many years ago. Is there a bluebird in your heart?? This poem suddenly became special because it is as though written especially for my uncle. I am definitely sharing this with my honor class students.
The Bluebird by Charles Bukowski

from The Last Night of the Earth Poems

there’s a bluebird in my heart that
wants to get out
but I’m too tough for him,
I say, stay in there, I’m not going
to let anybody see
you.

there’s a bluebird in my heart that
wants to get out
but I pour whiskey on him and inhale
cigarette smoke
and the whores and the bartenders
and the grocery clerks
never know that
he’s
in there.

there’s a bluebird in my heart that
wants to get out
but I’m too tough for him,
I say,
stay down, do you want to mess
me up?
you want to screw up the
works?
you want to blow my book sales in
Europe?

there’s a bluebird in my heart that
wants to get out
but I’m too clever, I only let him out
at night sometimes
when everybody’s asleep.
I say, I know that you’re there,
so don’t be sad.

then I put him back,
but he’s still singing a little
in there, I haven’t quite let him
die
and we sleep together like
that
with our
secret pact
and it’s nice enough to
make a man
weep, but I don’t
weep, do
you?

Email ThisBlogThis!Share to TwitterShare to FacebookShare to Pinterest
Labels: Aspirations and Inspirations