Run for the Future Marathon 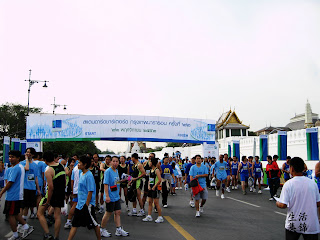 water softeners
The Run for the Future marathon sponsored by Standard Chartered Bank Bangkok took place on November 22, 2009. Hobbit and I decided to join the fun and signed up for the 5km.

That morning, we woke up at about 4am, had breakfast and left to meet up with Chervie and Zico at B.10. We hopped on a taxi that drove insanely all the way from Ekamai to Wat Pra Kaew and there we were welcomed by hundreds of others who joined the run. We thought our 5km would start at about 7am but many got too excited that they shoved off the starting point way earlier! :)

The breezy and chilly weather made it just nice for the run. We ran across nearby streets and returned to where we first started. It was really a run for fun since we hardly sweat! Five kilometeres is considered an accomplishment since two kilometers exist! We claimed our medals, forsook MC Donalds and headed to China town where we had our rare "goose" brunch!

There is another similar run along the BTS today. It was a run for the King's birthday and in to celebrate the 10th anniversary of the BTS! If it wasn't for *toot*, we would have joined! <_>
Posted by Hobbit Wife at 3:26 PM