Thank God I live to witness such a good number on the calendar. Being in Thailand for the past 10 years, number 9 has always been a significant number all around. No doubt it is considered a very good if not a lucky number to the Thais.
To does of you foreigners in Thailand, do 99B, 199B or 299B sound familiar? Yeah, things we buy here are usually priced at these amount because number 9 in Thai is "gao" which sounds similar to a word that means "to move forward." Since this is an auspicious day for the Thais, the general public here had been trying to achieve several things on this day.
From what I heard from 107FM, several people had been planning big on this lucky day. Tata Young has chosen this day to release her latest album, pregnant women in the hospital are trying to deliver their babies on this day, a Thai horror movie is also scheduled to be released today, and many couples waited to this day to tie the knot. It is also an auspicious day to start new things and new businesses.

Apart from all the above's plans, number 9 has also been a target for those who gamble. Some Thais rather spend a lot of money to get lottery tickets and also get their plates number with the number 9.

On the other hand, most institutions such as schools, government and private work place took this auspicious opportunity to pay tribute to the king. Almost everyone across the kingdom gathered at their workplace, schools, home etc. exactly at 9:09am to sing the royal anthem and other related songs to honor the king of Thailand. I had my share of witnessing such event in school. Here are some pictures taken from where I was standing during the elementary assembly. I was forced to use my phone camera to capture all these shots! I wonder what will my 10 10 10 brings next year! :) 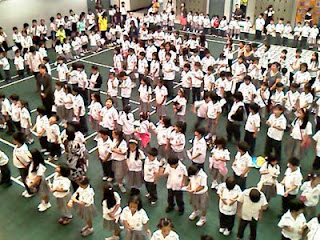 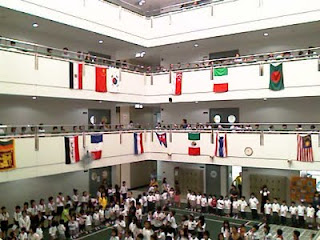