It's another holiday. I got out of bed laaaaaaaate in the morning, washed up and headed to the kitchen. As far as I know I only had one reason walking towards the kitchen--HUNGER. Then the dusty shelves took hold of me and in no time I found myself cleaning! Wiped, dusted, swept, wash, polished...'Til I thought "Wow, I could take over the cleaner's job!" Well, that could be if only I become a full time Tai-Tai (housewife)!
One glance at the clock gave me a shock of a noon time...It was already 2ish pm and I haven't had breakfast and now I have to start cooking lunch for Hobbit who was busy doing his work since don't know when. So I switched on our ipods and moved through all the songs while messing up the kitchen AGAIN (can anyone confess their kitchen is never in a mess because I could hardly maintain mine to look decent most of the time). So this was what I managed to fix... 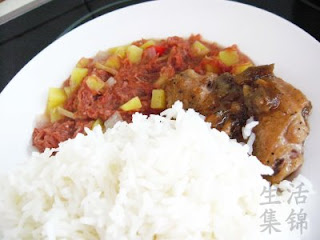 Corn beef + pepper chicken + rice + papaya (not in picture)
After brunch, I went to the kitchen and did some cleaning and washing again and moved into the living room to do some sewing on some of my clothes that needed fixing! Guess what, most of the clothes that I took out to fix were the ones I bought from Platinum and night markets around. They are cheap are they? And they "last long" too. :(

Next up, it was time to give some attention to our piled laundry. After the flip-flop-flip-flop -finally-throw into the washing machine moment, I rested for a while and watched Parental Choice on MTV channel. It was hilarious LOL! Maybe I should elaborate in another post. Finally heard the siren from the washing machine...hung the clothes and FINALLY, my housewife errands came to an end as of today.

I now could beg Hobbit to let me plow and harvest my farm in FB! Yay!

Corn beef!!! Where did you get corn beef in Thailand?