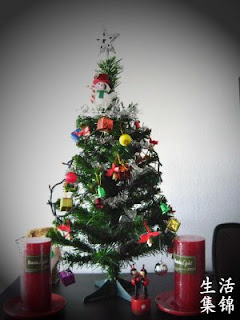 Hobbit and I are so in love with our new pad. It is amazing how God led us to this place. Anyway, let me try my best to relate what exactly happened that kept us kneeling for answers for almost 3 weeks.

We had long planned to move closer to where we work. Closer means somewhere in between Ekamai and along Sukhumvit 71 road. So, while I was scanning through my feeds one night, I came across two empty apartments that we thought would be perfect just for the two of us. One is very close to where Hobbit works, the other was very close to where I worked. We got excited and thought we really need to check these two apartments out. So we did and guess what? These two apartments were owned by one same owner -- a friendly and kind-hearted lady.

So we made an appointment with Lady A to check out the apartment that is closer to Hobbit's school. We liked it but the location and environment were not as what we have expected. The apartment was about 50 sqm or more, one room and a big living room attached to a kitchenette. Nope. We don't think so. Then we asked Lady A if she could take us to see her other apartment for rent close to MY school. She agreed and took us there. The moment I stepped in, my heart told me to say YES to this place. I looked at Hobbit and I could see a big yes on his face too. It's 80sqm, 2 rooms, 2 bathrooms...A bit too big for two though but hey, look at the things that we have accumulated throughout the years! Another good thing about this place is that Lady A is willing to cut off 5000B from the initial rent if we sign long term contract. Wow! We got excited yet wasn't quite sure of our current home status.

We asked our current landlord if we could move since we sort of found a place closer by our work place. He said we can but we really need to complete another 2 months of contract. Dissapointed but yet we knew it wasn't meant to be.

A few days after our talk with our landlord, he called and said we could move end of November and asked for a date when we could move out. So we said end of November. We called Lady A and she said the place is still available. So we gave her a YES. Then, this was where the complication started.

My heart was torn between moving and not move at all. I don't know why. Somehow I felt uneasy about the whole moving thing. I told Hobbit about what I felt and he felt the same too. The major thing that kept us thinking hard at that moment was the rent. We could afford it but somehow it doesn't serve the whole purpose. There's only two of us, why do we want such a place that cost that much? And knowing it's Sukhumvit area, it's considered expensive for 80sqm. We continued to pray for God to help us with our decisions.

We asked our landlord if we still can stay for another 2 months. He said no because the initial owner wants to sell the room to someone else since he needed money badly at the same time. It was "just the right time" we told them we wanted to move! Great...Our feelings towards the Sukhumvit 71 place kept lingering on and off then. Then we called Lady A and said "no" with hesitation and holding back some. Oh!

Then we ask our current landlord to look for another place for us to move into for 2 months until we find another place again. So he recommended a 100sqm room just 10 steps across our door steps. That's VERY close and it's big too compared to our then 60sqm apartment. What was important was that it's WAY bigger, cheaper and nicer compared to Lady A's Suk. 71 apartment. So we told our landlord that we'll take it. So our problem is settled there.

Nope. Next day, our landlord told us that the initial owner of this 100sqm has rented it to someone else. Again we were crushed. There's not much time. We have a week left to decide. Lady A called us and told us that we could still rent her place eventhough we have to move in end of December. She was more than willing to wait because according to her, she rather have us rent her place than give it to other people. So we said YES again since we have no where to go.

Then our landlord suddenly called us and wanted us to help a Korean family finish their contract of 4 months left. We went to the apartment where the Korean lived and felt it was okay for 4 months, plus we didn't have to add anything to the rent. Again we contemplated and for the last and final time said NO to Lady A. Thank God she understood our situation.

No. The Korean was playing a game on us. They suddenly decided not to move at the last minute!!! Arrrghh! Our blood pressure rose and decided that we had enough of this crap and pressure! Again we were going to be homeless until our landlord came to our apartment with a VERY (it got to be!!!!) good news! The initial owner of the 100sqm prefered us to be the renter instead of the other person. Thanks to our landlord friend.

We moved in our new place exactly on November 30, 2008. It took less than an hour to move our stuff from the door across to this place. We don't know what we did to deserve this place but it was quite a journey. To look back and not think it was God, impossible! It was He who made all things possible.

Had we considered the apartment at Sukhumvit 71, 80sqm, not as nice as this place, expensive but closer to work, maybe we would it would give us more guilt for paying so much. Yet we could pay less and save more money staying in this 100sqm comfortable place!

Often I find it hard to understand how He works things out for the good of His people. That is why I tend to want everything work according to what I think is best. Only if we trust Him can He work wonders in our lives (Isaiah 41:10).

Oopps, Sabbath is coming to an end and it's starting to get dark outside at just 5:23pm, winter please stay on because we love you...

God's way is unpredictable. You just have to trust.

so, i'm like a wee bit confused here? Are you now staying in the 100M apt for GOOD, or for 4 months?

At any rate, congratulations!!